There are records of early Wortley family connections with ironworking in this area. Margaret Corbet, widow of Thomas Wortley, had tenure of a bloomery furnace in Thurgoland probably on the site of Old Wire Mill; it had been the property of Thomas who died in 1543 and probably acquired from the religeous at the dissolution of the monasteries. There was a 1621 lease of a bloomery probably on the site of the Tin Mill.

Top Forge and Low Forge were built by 1640. Sir Francis Wortley had mortgaged much of his property to his mother, Elizabeth Boughton, by then Dowager Countess of Devonshire. William Fownes, Husband of Elizabeth Spencer, an ironmaster from Shropshire, was at Top Forge bloomery in 1638. This is the start of a connection with the Spencer family which will last for 180 years.

William and Elizabeth’s son-in-law, William Cotton came from Cheshire to manage Top Forge and Low Forge. He was also involved with Kirkstall Forge at Leeds.

Sir Francis Wortley’s grandmother was a Swyft and this family had, in 1627, bought a monopoly from King Charles I for working iron in the Don valley, and in a 1632 law-suit had objected to Sir Francis working iron. A compromise must have been made to allow the Forges to be built. We may note that William Wood while living at Nabs Hall, the Swyft family home, was involved in running the Forges in the early 1640s.

In the Civil War, which started in 1642, it is not surprising that William Cavendish, Marquis of Newcastle, while governing Sheffield Castle, should turn to his cousin by marriage, Sir Francis, to obtain forged shot from Low Forge for the defence of Sheffield Castle and later in preparation for the Battle of Marston Moor near York.

Sir Francis was captured before the battle and was imprisoned in the Tower of London 1644 – 1648. The Parliamentary army decisively won the battle. The Royalist cavaliers never had another significant victory.

Now the Parliamentarians would supervise the Forges. William Wood, a royalist, disappears from the scene and William Cotton remained in charge.

The Wortley estates had been confiscated and after the Civil War (Sir Francis I died in 1652) in 1655 Sir Francis Wortley II took the Oath of Abjuration and his estates were restored to him – there would be substantial fines to be paid. Sir Edward Wortley, a parliamentarian and brother to the late Sir Francis I, was involved and it was he who signed the 1658 lease to the Forges to John Spencer I.  Elizabeth Boughton Wortley Cavendish died in 1642 and no doubt the Wortley estate mortgages had been settled.

It has been suggested that John Wilson of Broomhead acted as receiver of the confiscated Wortley property and in 1659 he was living in Bromley close to Wortley Hall.

Now there is a connection between the Wortley family and the area around Retford in Nottinghamshire. At some time in the past, Sir Richard Wortley (father of Sir Francis I) had bought the Manor of Babworth. William Cavendish, 1st Earl of Devonshire had bought the advowson of East Retford. Elizabeth Boughton while Dowager Countess had bought more land near Retford which she settled on her younger son Sir Edward Wortley.

It is not surprising  that  Sir Edward Wortley and then Sir Francis Wortley I became members of parliament for East Retford.

Sir Francis Wortley II in time became a wealthy breeder of horses with a stud at Wortley Hall. He owned a famous horse called “Old Montagu”. Sir Francis died in 1665 leaving no male heir but an illegitimate daughter Anne Newcomen. The estate was left to Anne on the condition that her husband should take the Wortley name.

Anne Wortley (Newcomen) was born in 1659 and in 1665 was made a ward of Edward Montagu, 1st Earl of Sandwich, to be raised at his family home of Hinchingbrooke at Huntingdon. She married Sidney Montagu, the Earl’s younger son in 1675; he would take the name Wortley Montagu.

Edward Montagu’s career had been spectacular, following Oliver Cromwell through the Civil War and the interregnum, and then bringing back Charles II from Holland in 1660. He died in a naval battle against the Dutch in 1672.

William Simpson, a Sheffield attorney, was living at Babworth Hall (200 metres from Babworth church) around this time. The advowson of the church was later acquired by the Simpson family and the rev. John Simpson installed as rector 1728-1743. He made his home at Stoke Hall near Grindleford, restored in 2011.

John Spencer died in 1658, the same year he had taken lease of the Forges and it is assumed that his son Edward Spencer took over the 9-year lease to 1667 and (although the 1667 lease is missing) also a further 9-year lease to 1676.

1676 was a time of crisis in the Spencer organisation. William Cotton I, who had been the chief clerk to the whole Spencer-Fownes operation, had withdrawn to join the Chirk Castle forges. By 1672, Russell Allsop, William Fownes II who had inherited Gilbert Fownes’ share and John Bancks who had bought William Cotton’s share, were dissatisfied with the way that Edward Spencer was running the business. They set out to deprive him of control, installing their own managers and reducing assets.

By this time , William Simpson had an established partnership “The Company of the North” with William Cotton II (grandson of William Fownes I and Elizabeth Spencer) and Dennis Heyford.

The Forge Lease of 1676 was given to William Simpson and signed by Sidney Wortley Montagu. It was time for an alliance between William Cotton II (brother in law of John Fell), Thomas Dickin II and Dennis Heyford (who had acquired Rockley  Furnace from Lionel Copley I who died in 1675).

In 1680, Ann Wilson, daughter of John Wilson married John Spencer II with a marriage settlement of £400.

There is a period of uncertainty 1688-1695 before the Forge lease is formally taken by Thomas Dickin II and the Spencer influence is again clear. By 1700 John Spencer II was the head of the Spencer organisation.

John Wilson’s son Matthew Wilson appears at the Forge a little after 1700 and remained there managing all the works along this stretch of river for his Spencer in-laws for the next 30 years.

John Wilson’s daughter Susanna married the vicar of Cawthorne, Thomas Cockshutt and, through her son John and her grandsons John and James, the Cockshutt management would continue to 1819.

At some time, after the birth of his illegitimate daughter Anne in 1659 and before his death in 1665, Sir Francis Wortley the 2nd baronet made his will leaving his estates to Anne Newcomen with the condition that her husband should take the Wortley name.

Anne was to be the ward of Edward Montagu. Sir Francis’ family and advisors clearly intended that her future husband was to be Sidney Montagu, the second and favorite son of Edward Montagu who had been created the 1st Earl of Sandwichin 1660 when he brought King Charles II back to England from Holland.

It may be interesting to look for any family connections between the Wortleys and the Montagus in an attempt to discover why this particular choice was made. 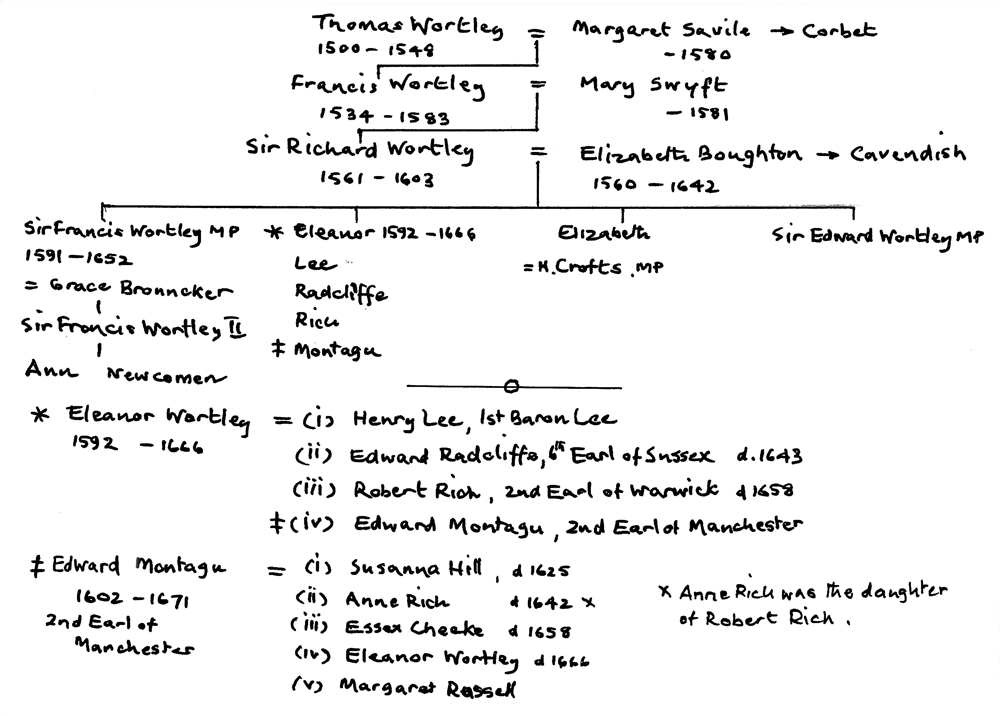 First, Elizabeth Boughton of Cawston Hall near Rugby, wife of Sir Richard Wortley and great grandmother of Anne Newcomen. Elizabeth made  a second Marriage into the Cavendish family.

Second, Grace Brouncker was the wife of Sir Francis Wortley the 1st baronet and grandmother to Anne Newcomen.

Third, Eleanor Wortley was the sister of Sir Francis Wortley I and great aunt to Anne Newcomen. 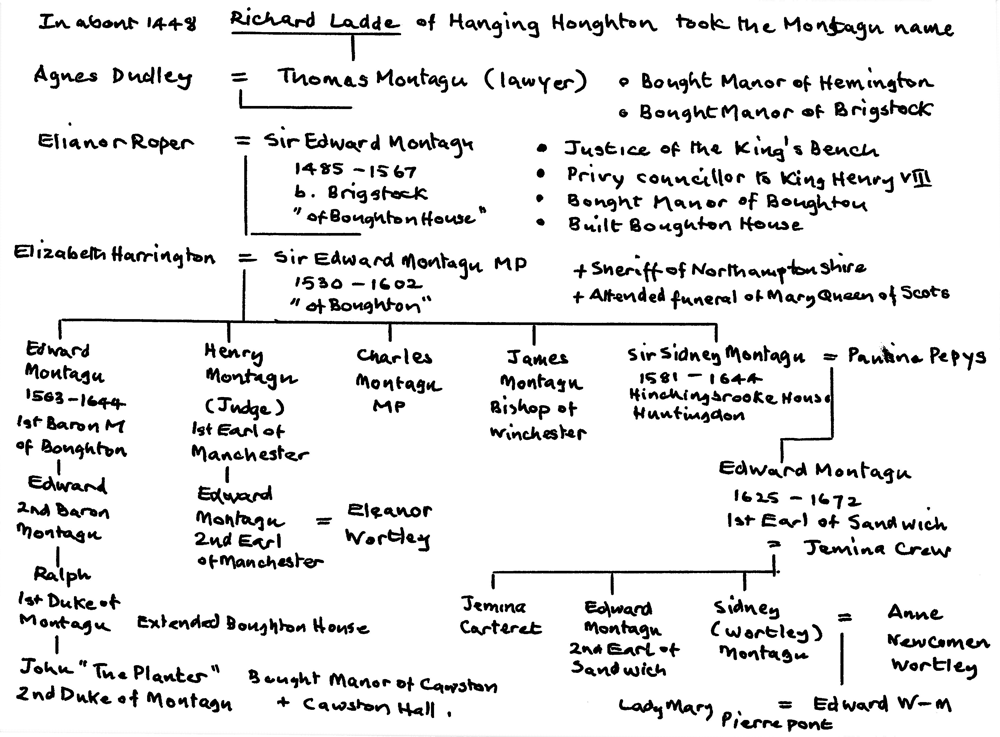 Examination of the Montagu family tree shows clearly where Anne Newcomen entered the family. On her father’s death, when Anne was made the ward of Edward Montagu (1625-1672), Sidney Montagu (1650-1727) was 9 years older than Anne. She then spent her childhood at Hinchingbrooke House at Huntingdon.

These were troubled times, with England engaged in a sea war with Holland seeking dominance in establishing colonial trade.

The Montagu family is not so ancient as it might appear. Although the original Montagu family dates from the Norman conquest, it appears that one Richard Ladde, of Hanging Houghton near Kettering, assumed the Montagu name for public relations purposes, while claiming a possible, minor family connection. 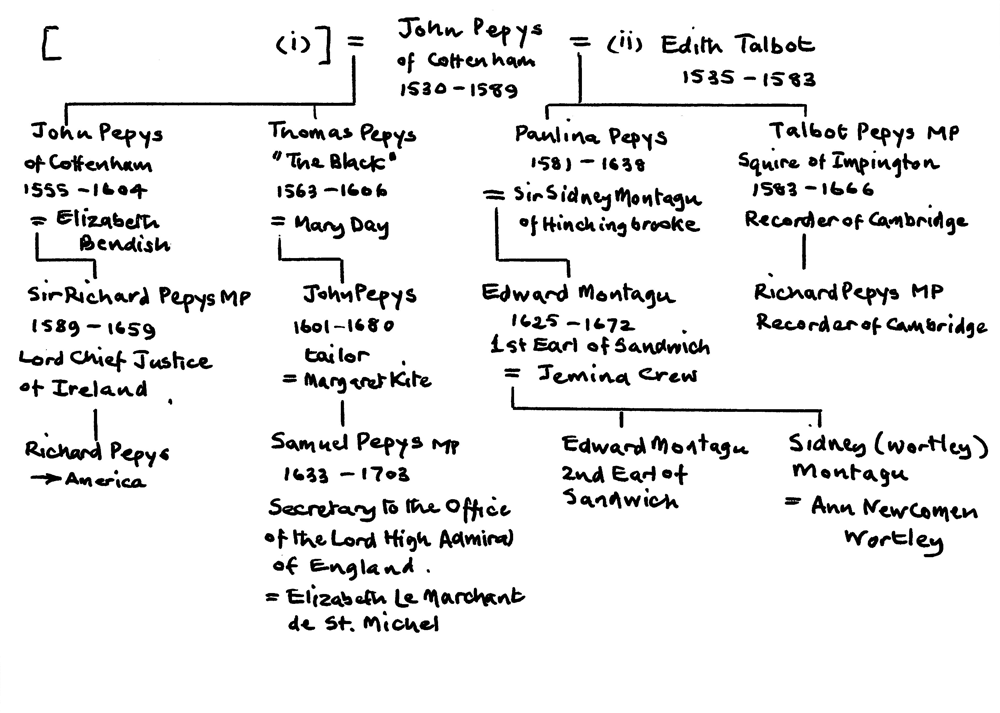 Sir Sidney Montagu (1581-1644), Edwards father, maintained Royalist loyalty in the Civil War, refusing payment to the Parliamentarians and was sent to the Tower. Edward, however, closely followed Oliver Cromwell (also from Huntingdon) and he prospered under Cromwell’s patronage in the field and then in the navy.

It might be noticed that several of the Montagu titles include the name Boughton. The Monagu family had bought the Manor of Boughton but there appears to be no direct link with the Boughton family of Little Lawford and Cawston Hall.

The original Montagu family home at Hanging Heaton was abandoned in the 1660s when family trying to avoid the plague in London all perished.

Edward 1st Earl of Sandwich died in the naval battle of Sole Bay 1772 fighting against the Dutch. His son-in-law Phillip Carteret died beside him. Jemima had died in childbirth in 1770.

Edward Montagu’s cousin, Edward 2nd Earl of Manchester had been a parliamentary commander in the Civil War. He was briefly a superior officer to Oliver Cromwell at the battle of Marston Moor. He married Eleanor Wortley,  as his fourth wife in 1659 the year that Anne Newcomen Wortley was born.

Eleanor Wortley married four times. Her last three marriages were to the Earl of Sussex, the Earl of Warwick and the Earl of Manchester. Eleanor died one year after Sir Francis Wortley II and might well have influenced family decisions on the future of Anne Newcomen.

Anne would be 13 years old (and Sidney 22 years old) when Edward 1st Earl of Sandwich was killed in 1772, but although her wardship was interupted, she would still marry Sydney in 1776 and he would take the name Wortley Montagu.

Although Elizabeth Boughton has no direct link to the Montagu family and was long deceased by the time of the Anne Newcomen decisions, it is interesting to note that the various family homes in the Midlands at Little Lawford, Cawston Hall, Boughton Hall, Hanging Heaton and Hinchingbrooke were all within a day’s ride. it is easy to imagine a common social scene.

Map of the Midlands 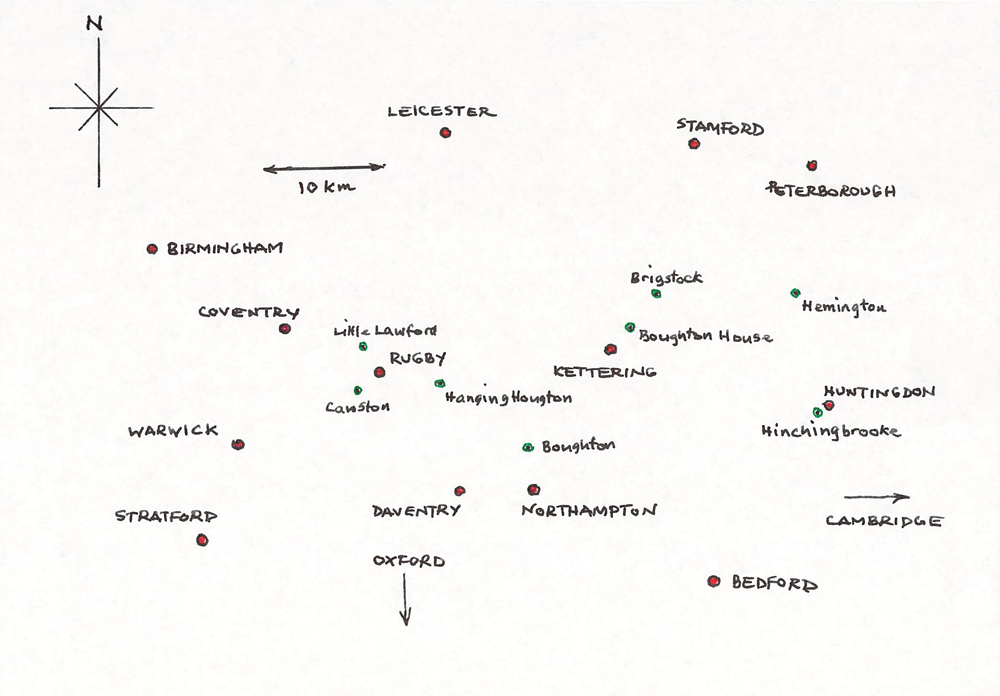 Grace Brouncker 1580-1615 died comparatively young with no known Montagu connections. However, it is interesting to note in passing that her cousin’s son Lord William Brouncker, 2nd Viscount of Lyons (Dublin), was an Oxford mathematician and first President of the Royal Society. He was a Commissioner for the Royal Navy, a close colleague of Samuel Pepys and would have been familiar with Edward 1st Earl of Sandwich in this role. 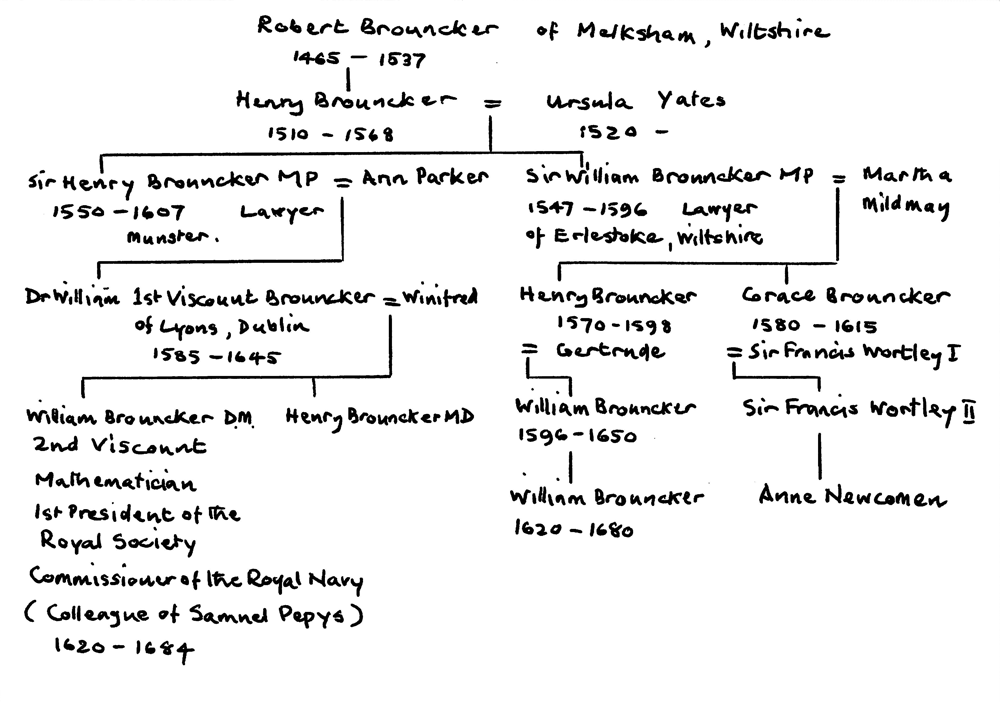 The Boughtons of Little Lawford had marriage connections to the Brocket family.

Family tree of the Brocket family

The Brockets have Yorkshire roots back to a Lord Mayor of York in the thirteenth century with a Brocket Hall at Appleton near Selby. Marriage to a suitable heiress moved the family to Hertfordshire and a new Brocket Hall was built at Wheathampstead. It was in the grounds of this Brocket Hall that Elizabeth I learned that she was to be Queen of England.

Eventually, if one searches far enough, everyone in this particular stratum of English society is connected to everyone else. Ralph the 1st Duke of Montagu, grandson of Edward 1st Baron Montagu of Boughton married Elizabeth Monck, daughter of Henry Cavendish the 2nd Duke of Newcastle at Welbeck Abbey which completes a Wortley connection begun with Elizabeth Boughton’s second marriage to William Cavendish. Ralph used his wife’s fortune to improve Boughton Hall to make an “English Versailles”.

Ralph’s son John,’the planter’, 2nd Duke of Montagu, bought the Manor of Cawston and Cawston Hall to seal a physical connection between the Montagu family and the Boughton family. 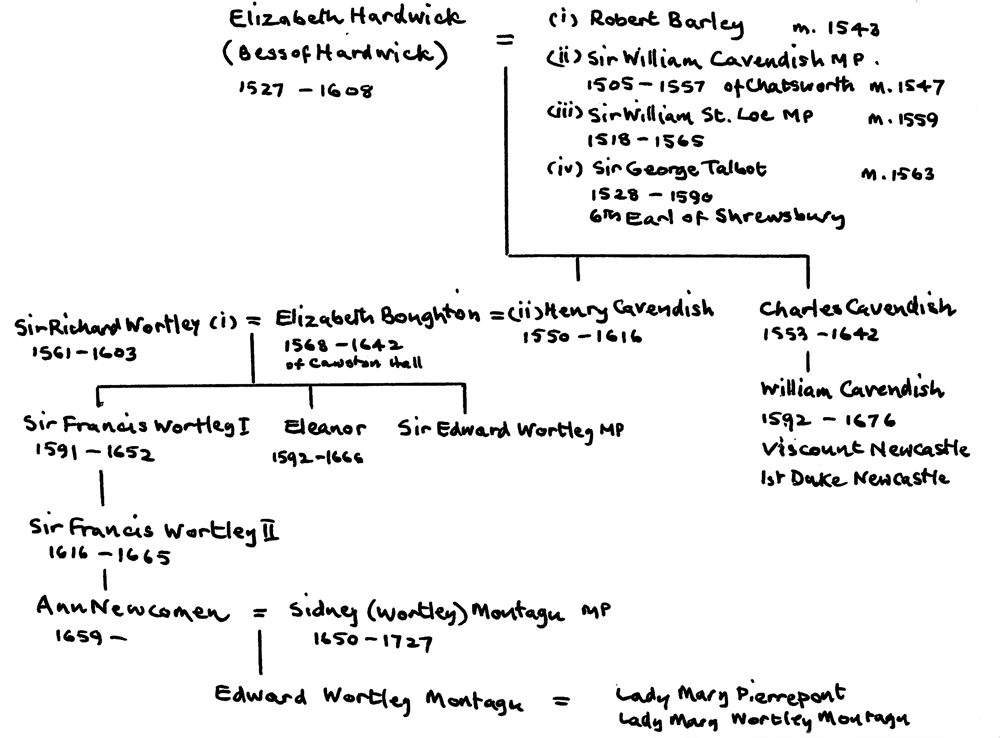