Where did the money come from?

We believe that ironworking has taken place in the upper Don valley around Huthwaite and Thurgoland since the 1300s.

The technical knowledge and the necessary capital were probably provided by Cistercian monks.  Roche Abbey at Maltby owned land at Thurgoland.

When Henry VIII dissolved the monasteries, the mineral rights usually devolved to the local landowners.

We now take up the story in the time of Queen Elizabeth I.

Francis’s stepfather William had a younger brother, Charles Cavendish (1553 – 1617) whose son, another William (1592 – 1676), became the Marquis of Newcastle at Bolsover Castle. Newcastle was a close friend of Charles I,  he became famous as an equestrian, playwright, swordsman and became a tutor to Charles II. In the Civil War, he commanded the royalist forces in the north of England.

Sir Francis Wortley was able to borrow money from his mother – now dowager Countess of Devonshire to build Top Forge and Low Forge before 1640.

It is not surprising that Newcastle was able to request, from ‘cousin’ Sir Francis, cannon shot, forged at Low Forge, for the defence of Sheffield Castle and later Pontefract Castle.

Sir Francis was also a leading cavalier but he was captured before the battle of Marston Moor and spent the years 1644 – 1648 in the Tower of London. He died in London in 1652 and never returned to Yorkshire.

Who managed the Iron Industry of South Yorkshire?

The Spencer family which came from Shropshire – west of Shrewsbury – on the Welsh border, arrived in South Yorkshire before 1640 bringing their iron working know-how with them. Brothers Walter, Randolph, John I and Edward, together with sister Elizabeth, her husband William Fownes and her brother in law Gilbert Fownes are to take over the iron industry of South Yorkshire.

John Spencer II, Randolph’s son, married, as his second wife, Margaret Hartley the young widow of Robert Hartley of Cannon Hall at Cawthorne. He acquired Cannon Hall by arrangement with her daughter Margaret to whom it had been bequeathed.

The next lease would be taken by John’s son Edward.

William Fownes appears at Top Forge bloomery in 1638 and his son-in-law William Cotton came over from Cheshire to manage Top Forge and Low Forge. It is very likely that the Spencers advised on the construction and lay-out of the Forges.

The Spencer-Fownes syndicate went on to take over two dozen forges between the Derbyshire border and Kirkstall Forge in Leeds. They gained the advantages of specialisation and monopoly and the availability of shared capital. Investment was divided 60% John Spencer I and 40% William Fownes and his brother Gilbert.

The role of an important local family

The ancient Mortimer Road heads south from Stocksbridge past Broomhead and Wigtwizzle. Christopher Wilson (1595 – 1671) of Broomhead in the Ewden valley spent much of his youth with his friend Thomas Wentworth (1593 – 1641) at Wentworth Woodhouse.  Thomas Wentworth was knighted in 1611, appointed President of the North and Privy Counsellor in 1629. He was made Lord Deputy of Ireland in 1633 where he gained unpopularity. He was created Earl of Strafford in 1640. He was impeached by Parliament in 1641 and (abandoned by Charles I) he was executed.

Christopher returned to Broomhead on the death of his father in 1620 to marry Mary Ibbotson of Wigtwizzle in 1623. He rebuilt Broomhead Hall. Christopher refused to attend the coronation of Charles I in 1627 (effectively turning down a knighthood). He was fined £15. In the civil war Christopher became a captain in the parliamentary army. Mary is reputed to have held off a siege of the Hall by royalist troops.

Two of Christopher and Mary’s sons are worth noting. Charles Wilson became the vicar of Babworth in Nottinghamshire (a living in the advowson of the Wortley family) and then the vicar of Sheffield (1681 – 1695).  John Wilson married Ann Hey in 1656. The children of John and Ann Wilson became closely connected with the iron industry.

Suzanna married the Rev. Thomas Cockshutt (1655 – 1729) at Cawthorne and their son and their grandsons would manage Wortley Forges.

Matthew Wilson (1678 – 1739) managed the Forges from about 1705 for 30 years. Matthew oversaw an expansion of the Forges in 1713. He did not marry and his youngest sister Mary may well have acted as his housekeeper at Top Forge. Mary died in 1747 and is buried at Wortley. 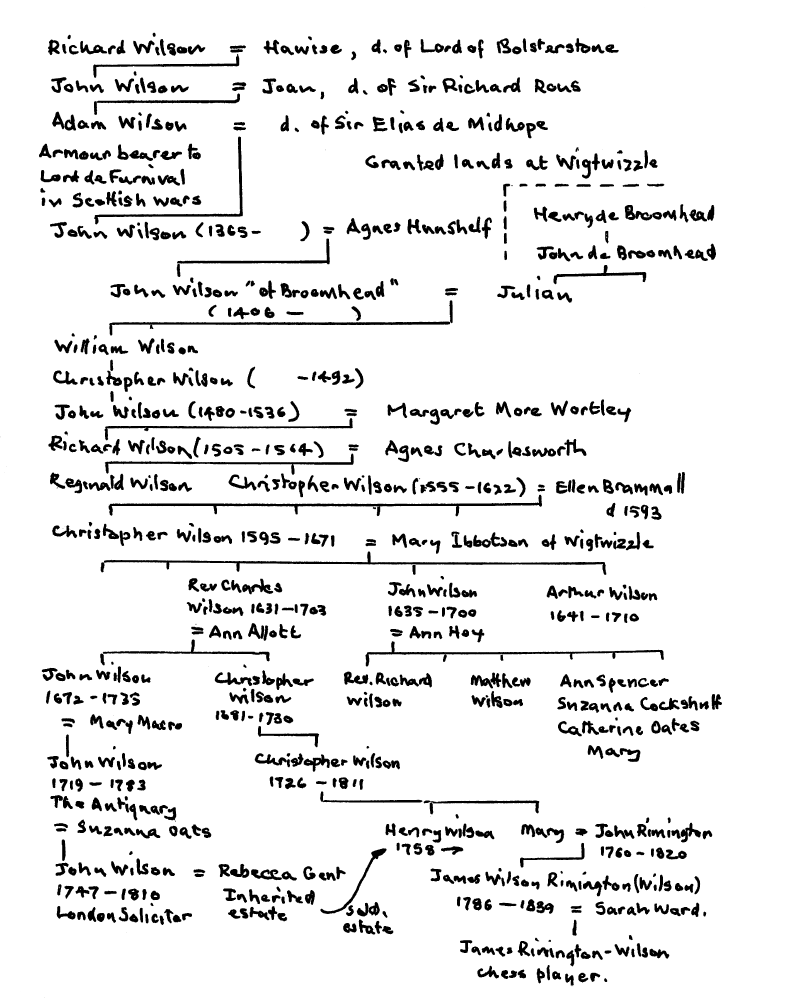 The contribution of the Cockshutt family

John Cockshutt I followed his uncle Matthew at manager of the Forges (having had experience of 9 years at Ayton Forge near Scarborough) and built the Tin Mill in 1743 before leaving to follow other interests. It is suggested that he spent time in America.

The vicar’s grandson, John Cockshutt II, took over from his father and his 1771 patent for producing wrought iron directly from iron ore is responsible for the introduction of an air pump at Top Forge which has been recreated by the Forge Volunteers in recent years.

A second grandson, James Cockshutt, showed sufficient early ability to deserve a mentor. James worked for and worked with John Smeaton (from Leeds) throughout his career. Smeaton was a nationally acclaimed civil engineer who built the Edistone lighthouse and was an expert on water power. Smeaton sponsored James Cockshutt’s Fellowship of the Royal Society.

In 1770s James managed the largest finery ironworks in the country at Pontypool. In 1780s James worked as managing partner to Richard Crawshay (from Normanton) at the Cyfarthfa works in Merthyr Tydfil and introduced Henry Cort’s innovative method of puddling and rolling wrought iron around 1795. Shortly afterwards, James returned to Wortley and brought puddling to South Yorkshire.

In the late 1790s Wortley was at the forefront of wrought iron technology in the country and justifies the present status of ‘Scheduled Ancient Monument, grade I’.

Of course these are the times of the Industrial Revolution. There were not very many outstanding engineers in the country and they would know each other. The Lunar Society in Birmingham is an example where Matthew Boulton and James Watt socialised with Josiah Wedgwood, Erasmus Darwin and Joseph Priestly at Soho House and the horses found their way home by moonlight.

A further look at the Wortley family

Although not directly relevant to the Wortley Forges, it is interesting to look at the history of the Wortley family.

After the civil war, the family depended on the good offices of parliamentarian Sir Edward Wortley and then the restoration of Charles II to restore their fortunes.

The second baronet, Sir Francis Wortley, II had a childless marriage and left his estate to his illegitimate daughter Anne Newcomen.

A marriage was arranged between Anne and Stanley Montagu, 2nd son of the Earl of Sandwich, who took the name Wortley-Montagu.

Edward, son of Stanley and Anne, eloped to marry Mary Pierrepoint, daughter of 1st Duke of Kingston upon Hull.

Lady Mary Wortley Montagu travelled to Turkey with her ambassador husband and brought back to England a method of protection from smallpox. A pillar with a plaque is erected at Wentworth Castle gardens in her honour.

The Bute family gained large interest in the coal and Iron trade of South Wales and transformed Cardiff from a small town into an important trading centre through development of Cardiff Bute Docks.